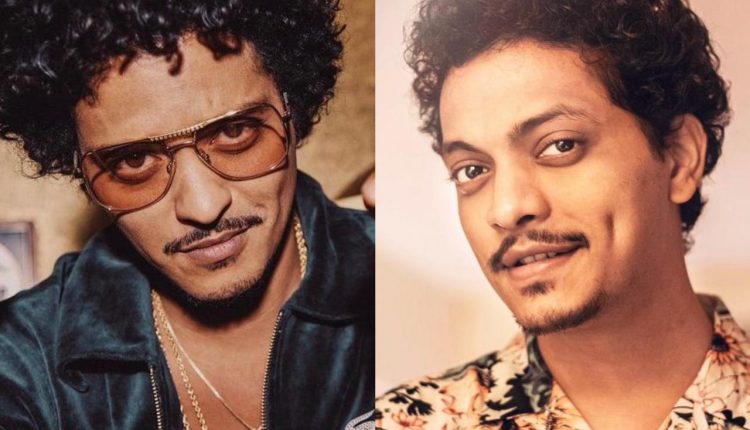 We all have heard about having 7 lookalikes in the world who have the same resemblance as us. Though we might not have met them, the power of the internet has certainly brought doppelgängers into existence. The thought can be amusing but not entirely unbelievable. In case you don’t believe you must take a look at all those people who resemble celebrities.

One such encounter was of singer Arpan Mahida whose uncanny resemblance to Bruno Mars sent the internet into a frenzy. Netizens started noticing the similarities after Arpan started posting his professional closeup shots that looked nothing short of similar to the international singer. Not just the internet but friends too started comparing Arpan’s pictures to Bruno which left everyone amused.

The talented singer is a known name in the music industry. His love for music goes way back to when he was just three years old. The music producer and composer nurtured his skills while growing up as he learned musical instruments like drums, keyboard, guitar, and other percussion instruments. He started his professional career in 2012, got his breakthrough as a playback singer for a Gujarati film named Aapne To Chhie Bindaas at an age of 15 and ever since then Arpan has seen an upward trend in his career. He has also appeared on a reality show named Entertainment Ke Liye Kuch Bhi Karega for playing various instruments in 2011.

Arpan’s debut in Bollywood as a music programmer was for the film ‘102 Not Out’ starring Amitabh Bachchan and the late Rishi Kapoor. His popularity on YouTube knows no bounds with millions of views being garnered on his soulful content. Arpan recently released an album titled ‘Spectrum’ that comprises several instrumental tracks like ‘Fairytale’, ‘Dauntless’, ‘Stranger Synth’, ‘Festivious’ and many more.

How To Watch Real Madrid vs Osasuna, La Liga 2020–21 Live Streaming Online in IST? Get Free Live Telecast and Score Updates of Football Match on TV in India