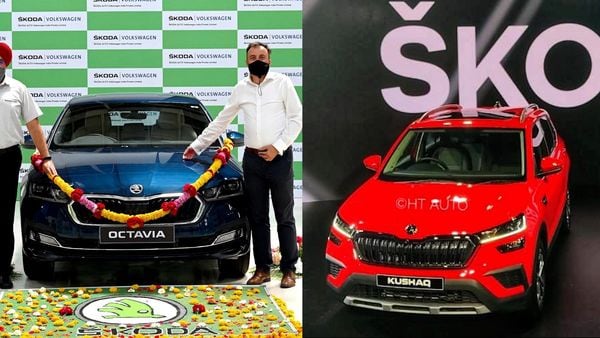 Skoda’s two upcoming cars for India – the new generation Octavia sedan and the Kushaq SUV – will start to reach the dealers soon. Zac Hollis, the Director of Skoda Auto India, has confirmed that customers will be able to see both cars in flesh at showrooms soon.

Both cars have already been unveiled in India. The 2021 Octavia sedan, which was earlier launched for global markets towards the end of 2019, was supposed to be launched in India last month. However, the ongoing Covid-19 crisis has forced the Czech carmaker to put off the launch for the time being.

On the other hand, Skoda Kushaq SUV was unveiled in India on March 18 this year. The date for official launch of the 2021 Kushaq SUV, along with price, is also expected to be announced later this year.

Zac Hollis took to Twitter today to confirm that both cars will reach showrooms soon. He specifically said that Kushaq SUVs will be available at showrooms from July, while the Octavia sedans may reach Skoda outlets by end of the year. This essentially means that Skoda is likely to launch at least the Kushaq SUV within a few weeks. Launch of 2021 Skoda Octavia may happen a little later.

The fourth generation Skoda Octavia is already under production, with the first batch of the sedan already rolled out of its facility in Aurangabad, Maharashtra. The Octavia is one of the most popular offering from the Czech carmaker in India.

The price of the new generation Skoda Octavia sedan is expected to range between ₹18-24 lakh and is likely to take on rivals like Honda Civic, Hyundai Elantra and Toyota Corolla Altis.

The newly-unveiled Skoda Kushaq SUV is based on the MQB-A0-IN platform. Skoda’s facility in Chakan has been upgraded for this purpose to use the new platform and manufacture vehicles. This is the same platform that will be used for Volkswagen’s upcoming Taigun SUV which is a technical twin to Skoda’s Kushaq SUV.

The new Kushaq will be offered with two engine option, including a 1.0-litre and a 1.5-litre TSI motor. The 2021 Skoda Kushaq SUV is likely to be priced in the range of ₹12 lakh to ₹16 lakh (ex-showroom) and will rival the likes of the Hyundai Creta and Kia Seltos SUVs in India.

Travis Head – Australia selectors have been ‘ultra-clear’ about Test role

Drive to be launched against makers, dealers of e-bikes to check illegal changes in…

Cars, Bikes To Get Costlier As Third-Party Vehicle Premium Rates Hiked From June 1