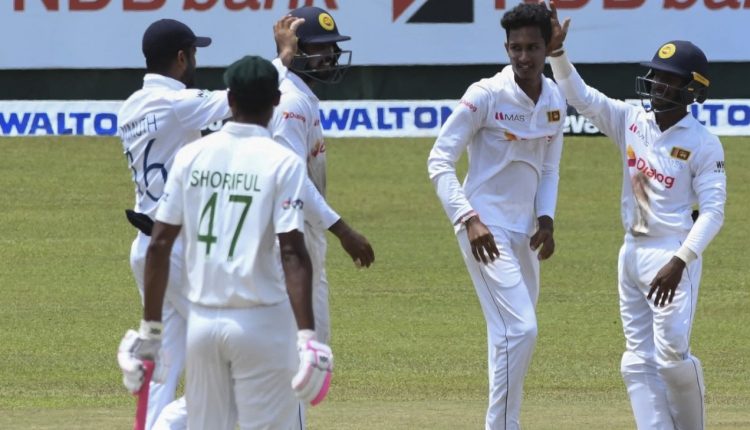 Sri Lanka’s captain also had words of praise for Ramesh Mendis, though he felt he could improve his lines and lengths

Praveen Jayawickrama was on Test debut, and had played only 10 previous first-class matches. Ramesh Mendis was playing just his second Test. And yet, the pair combined to take 17 wickets in the match, bowling Sri Lanka to a commanding victory over Bangladesh in Pallekele – the team’s first win against World Test Championship opposition since August 2019.

“Praveen does the simple things well,” Karunaratne said after the match. “He pitches the ball in the right spot. That’s something we saw from Rangana Herath as well. He makes the batsman play, and gives the ball a chance to do something. When you play at this level, you have to have that consistency in line and length. He did his job 100%, and played like a bowler who had more than his 10 first-class matches. It’s a great sign for the future of our Test cricket.

“The seniors just gave both bowlers confidence. Some players can panic at times when they come into the Test arena, because they try a lot of things. What we tried to tell them was to play as if they would a regular first-class game, and to handle the pressure that way. Praveen absorbed pressure really well.”

Mendis’ own match haul was 6 for 189, and he was particularly effective in the second innings, claiming the wickets of Bangladesh’s most senior batsmen – Tamim Iqbal (caught behind), Mominul Haque (bowled off an inside edge), and Mushfiqur Rahim (caught at leg slip). While he has been a batting allrounder at the lower levels, Sri Lanka coach Mickey Arthur even before this series had identified Mendis’ bowling as a potential asset to the Test side.

“At a time when we didn’t have anyone experienced, both bowlers came and bowled like experienced players,” Karunaratne said. “I think Ramesh also gave Praveen a lot of help from the other end, in terms of building pressure. That bowling partnership was good, and they had an understanding because they also play for the same club [Moors Sports Club].

“Ramesh can improve a little bit more in terms of his lines and lengths, but it’s also his second Test, and when he gets to 15-20 Tests, he’ll be able to get the hang of all that.”

Karunaratne also praised Sri Lanka’s batting order, which put up an imposing 493 for 7 in the first innings, with Karunaratne himself and Lahiru Thirimanne hitting hundreds, before Oshada Fernando made 81 and Niroshan Dickwella produced 77 not out. For Karunaratne, this was a continuation of the progress the batting order had made in the West Indies, where Sri Lanka played out two draws.

“In the West Indies we did a lot of good things. It’s not an easy place to bat, with the Dukes ball being used. But we fixed our mindset and worked on our temperament and patience. I think that’s why we were able to make big scores in this series – Dhananjaya de Silva’s 166 [in the first Test], and Thiri’s 140. We knew that we needed a big score on the board in the first innings to win a match, so that was playing on our minds. We took responsibility.”