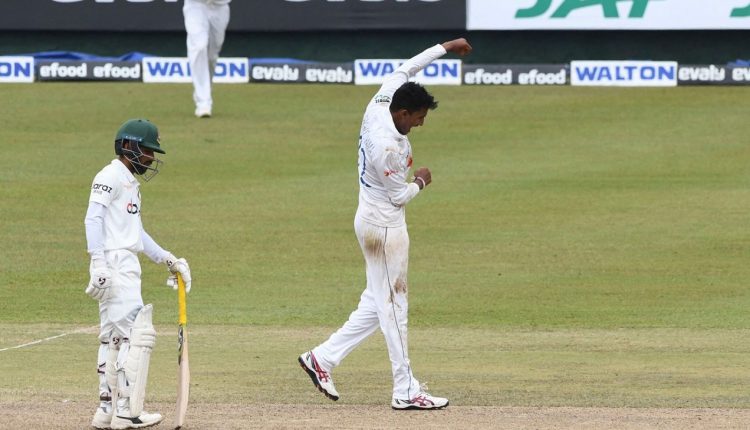 “He bowls and puts pressure from one end, and I was doing the same,” Ramesh Mendis says of his partnership with Praveen Jayawickrama

There was nothing wrong with Bangladesh’s approach in their second innings of the second Test in Pallekele on a pitch that has changed significantly, according to Najmul Hossain Shanto, but they are up against it at 177 for 5 with Liton Das and Mehidy Hasan at the crease, and the target still 260 away.

In the 48 overs they have faced so far, the Bangladesh batters haven’t really taken to stonewalling. All the top-five batters played briskly – Shanto’s strike rate of 59.09 was the slowest of the lot – but none of them managed to cross Mushfiqur Rahim’s score of 40. Shanto, who made 26 off 44 balls before Praveen Jayawickrama got one to hit his stumps, said that Bangladesh would have been happier had they lose two wickets fewer.

“I think being negative makes life more difficult for the batsmen on this wicket,” he said. “[Being] positive doesn’t necessarily mean hitting every ball; it wasn’t the plan. But we played with intent. It is normal for spinners to get help from the pitch on the fourth and fifth day of a Test match. We all made good starts, but we couldn’t go on. It would have been a better day had we lost three wickets.”

Depending on how the fifth day plays out, questions may be raised on whether it was the right approach. Tamim Iqbal continued to score freely, which was expected after scores of 90, 74* and 92 before the 26-ball 24 on Sunday, but Saif Hassan and Shanto trying to hit their way out of trouble looked a little out of place when five sessions have to be tackled.

Mominul Haque and Rahim, too, were unusually flamboyant, at times charging out of the crease after telegraphing their intent. Rahim survived a stumping chance when he actually left a ball through his legs, but Niroshan Dickwella couldn’t gather it.

Shanto, however, argued that the bigger problem was the collapse from 214 for 3 to 251 all out in the first innings on the third day. “I think we should have batted better in the first innings. I think we are left behind because of that,” he said. “We were 200-odd for three, but we couldn’t put together any more partnerships, which set us back. It was difficult to handle spin but one has to better handle these things at the Test level.”

From Sri Lanka’s point of view, Ramesh Mendis, the offspin-bowling allrounder, and left-arm spinner Jayawickrama have so far picked up 13 wickets in this Test, the latter accounting for eight of those. Mendis said that his familiarity with Jayawickrama’s bowling helped them forge a good partnership. Although this is Mendis’ second Test and Jayawickrama’s debut, they play together for Moors Sports Club in domestic cricket.

“Praveen bowled well, and he and I play for the same club, so anyway there is a bowling partnership there,” Mendis said. “He bowls and puts pressure from one end, and I was doing the same. If we get one more wicket, we’re into the bowlers, so I think we’ll be able to get them out quickly.”

Although Sri Lanka have Bangladesh on the ropes, the whole fifth day available to get the remaining five wickets, they have burned all three of their reviews. “There could be a bit of pressure on us because the reviews are all gone,” Mendis said. “I’m not thinking too much about that, because we only need five wickets. It’s not going to be easy to get them, but if we keep doing the right things – that’s all we should worry about.”

Back to Shanto and his own form – two ducks after scoring 163 in the first innings of the first Test – he said, “I think it’s important that I don’t get too satisfied by playing well, and also not be too down when I am not doing well. I had two bad innings after making a good start. I started well today but couldn’t make it a big one.

“Of course I could have done better, but I am not too worried about these things. I want to grab the next opportunities.”

With inputs from Andrew Fidel Fernando

Tesla’s German factory will not start production until next year: Report