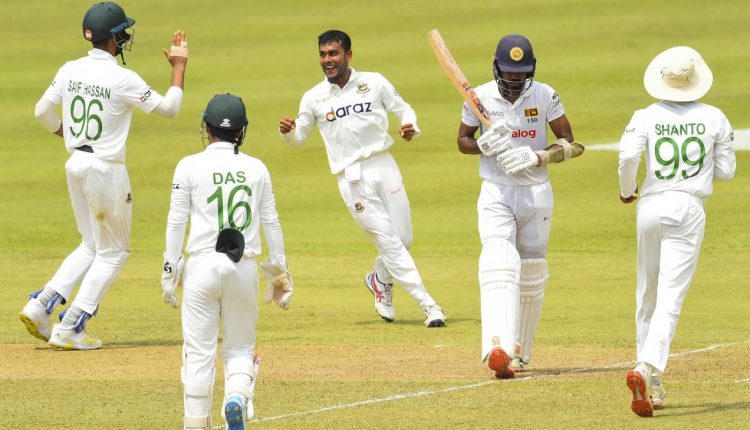 No. 3 “disappointed” not to get to three figures as Bangladesh fight back in Pallekele

Losing the middle order cheaply, before bad light and rain took 24 overs out of the day, set Sri Lanka back in the match. This was according to No. 3 batsman Oshada Fernando, who hit 81 in the first innings and was involved in a 104-run second-wicket stand with Lahiru Thirimanne.

On a Pallekele surface that began to exhibit signs of life on day two. The hosts began the day on 291 for 1, but lost five wickets for 69 runs through the first two sessions, before rallying to 469 for 6 thanks to a Niroshan Dickwella half-century. Bad light and later rain allowed only 9.5 overs to be bowled after tea.

“What we had planned for was to give them 15-20 overs to bat at the end of today,” Oshada said. “But because of the weather, and because we lost a few wickets in a cluster, we got stuck a little bit in the middle. From what I saw from the surface 550 would be a good score.”

Bangladesh had put pressure on Sri Lanka early on day two, when they allowed just 18 runs to be scored in the first hour, before taking three wickets for 25 runs in 16 overs before lunch. It was only Dickwella’s run-a-ball 64 not out that helped Sri Lanka’s scoring rate recover either side of the tea break.

“They bowled well in the morning, so we weren’t able to score quickly then,” Oshada said. “They bowled line and length very well. Because there was a bit of cloud cover, they probably had some help from the surface as well.

“The pitch was also was a bit slower today than it was yesterday. The ball tended to stick in the wicket a bit. I think by tomorrow or day after tomorrow, there will be some turn on this surface. There weren’t many footmarks yet, but maybe if it pitches there there could be some turn.”

Oshada has one Test century, which he made in Karachi at the end of 2019, but narrowly missed another hundred for the second time in three games. In the first Test against West Indies in February, he was dismissed for 91 in the second innings. Coach Mickey Arthur has spoken of grooming Oshada for a long stint at the first-drop position.

“I’m very disappointed about not getting to a hundred. I was out for 90-odd in the West Indies as well, and when you’re a batsman you feel you need to get those runs. It doesn’t matter where I get to bat – No. 3 or 4, or wherever, what you have to do is score runs as a batsman.”

Nuclear Waste Storage Tank in Washington State May Be Leaking, Says US Department of Energy