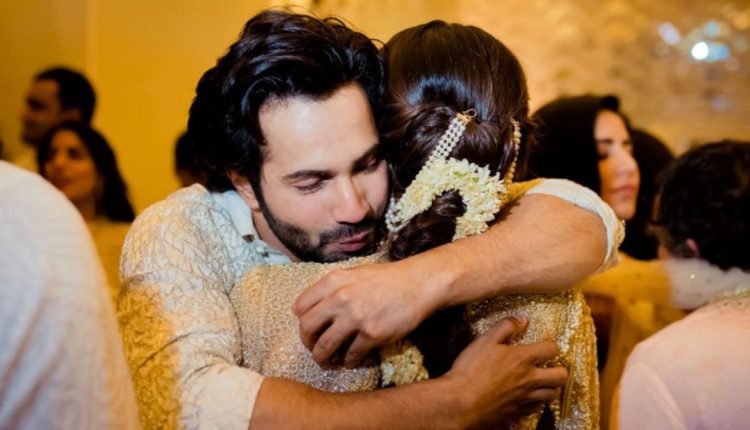 Terming him ‘bonafide filmy soul’ on his birthday, Bollywood star Sonam Kapoor on Saturday penned down a heartfelt birthday wish to Varun Dhawan to make his day special. Taking to Instagram, the ‘Raanjhanaa’ star posted a couple of throwback pictures with the birthday boy and sent warm wishes to the star as he turns 34. The first picture posted by the ‘Veere Di Wedding’ star sees Varun Dhawan as he gives a warm hug with Sonam, at a family function at Sonam’s residence. On Varun Dhawan’s Birthday, Here’s Looking at the B’dy Boy’s Raw Acting Alongside Arjun Kapoor in a Short Film (Watch Video).

The second picture is a monochromatic image that sees Dhawan having a gala time as he is surrounded by girls, and is wrapped in a net dupatta. Kapoor also penned a sweet birthday wish for the ‘Coolie No 1’ star. “Happy happy birthday, VD. A bonafide filmy soul, may you never run out of your infectious positivity, love for cinema and good vibes. Lots of love! ” wrote the ‘Neerja’ star. Varun Dhawan liked the post along with more than 61,000 fans. The birthday boy responded by leaving a heart emoticon in the comments. Varun Dhawan Turns 34! Arjun Kapoor, Riteish Deshmukh, Madhuri Dixit and Other B-Town Celebs Extend Heartfelt Birthday Greetings to Wish the Bhediya Actor.

While scores of fans sent birthday wishes to Dhawan to mark the special occasion. Earlier in the day, the ‘Main Tera Hero’ received birthday wishes from several Bollywood stars including Madhuri Dixit, Riteish Deshmukh, Tiger Shroff, Anushka Sharma and Arjun Kapoor to name a few. Meanwhile, on the work front Varun, who was last seen in his father David Dhawan’s ‘Coolie No. 1’, co-starring opposite Sara Ali Khan, recently completed shooting for the horror-comedy ‘Bhediya’ along with Kriti Sanon in Arunachal Pradesh.

The movie that is slated to release in cinemas on April 14, 2022, will mark the ‘Badlapur’ star and ‘Heropanti’ star’s third collaboration with each other after sharing screen space in 2015 rom-com ‘Dilwale’ and 2019 ‘Kalank’. Apart from ‘Bhediya’, the actor will also be seen in ‘Jug Jugg Jeeyo’ alongside Anil Kapoor, Kiara Advani, and Neetu Kapoor.

Meet Baptiste Monnet, Creator of Boost Mind Which Will Soon Become a Hub for Scholarly People With an Active Lifestyle