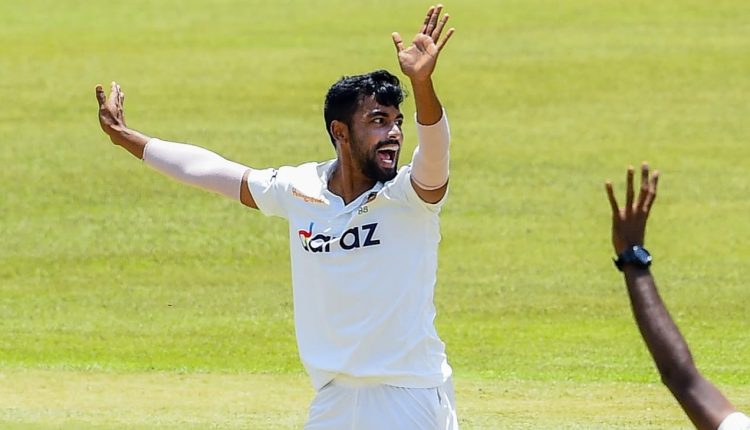 The aggregate batting average on this Pallekele pitch can only be compared to the 1997 Test at the R Premadasa Stadium, in which Sri Lanka posted a world-record 952 for 6. After seeing his bowlers suffer for three days, Sachin Tendulkar called it unfit for Test cricket. Depending on how much more is scored in this contest, similar criticism awaits.

The Bangladesh pace bowlers, an already endangered breed, have collective figures of 1 for 231, going for 4.20 per over for 55 overs. After making a promising start on the third afternoon, they couldn’t cope with the old ball, and neither did they create any more chances with the second new ball. Their performance is inferior to that of the Sri Lankan pace bowlers’ 6 for 279 at 2.63 per over. But comparing the two pace attacks is also like saying apples are like oranges.

Sri Lanka actually has a fast bowling culture. When they figured out their spin stocks wouldn’t be able to withstand an out-of-form Test team, they tried out a grassy pitch. Although it has now morphed into a sluggish, almost dead surface, at least they tried to rely on their fast bowlers. Bangladesh would never do such a thing in a home game. Even pretending to trusting fast bowlers is a big no-no.

The general lack of commitment towards pace bowling in Bangladesh’s philosophy is the danger ahead of the next Test. They will certainly think about dropping one of their three, bringing in a spinner or a batter; and reverting to type.

But the team management can do better than get disheartened so easily. There is ample evidence that encouraging a particular pace bowling unit can only help Bangladesh in the medium- to long-run.The Pallekele pitch provided very few tools such as pace, bounce, swing, seam or reverse swing to the pace bowlers. Yet there were encouraging glimpses.

Taskin Ahmed created the most chances among the three pace bowlers. He was willing to bend his back even in long spells. Ebadat Hossain too was expensive but for an out-and-out fast bowler who is used in short bursts, it would take a breakthrough Test performance to turn a corner. Despite his hugely underwhelming record, Ebadat seems to have the coaching staff’s confidence. Otherwise he wouldn’t have lasted this long in Bangladesh’s set-up.

Abu Jayed relies heavily on seam and swing, so he won’t always be penetrative on these pitches. He bowled well in Bangladesh’s last Test, in Dhaka where the pitch also lacked everything a fast bowler needs, and he has a few four-wicket hauls in overseas conditions so there’s no point in thinking he can’t do a better job in the next game. Sure, he could have been a lot more accurate, but it is also his eleventh Test.

Bangladesh probably picked a five-man bowling attack exactly for this reason. They may not have expected to make 541 given their indifferent batting form, but they certainly believed that if there was indeed life on this pitch, this pace attack might extract something out of it. Since there’s nothing, it is better not to read too much into their bowling figures just yet.

Taskin, who is playing his first Test in almost four years, admitted that the pitch was difficult for the bowlers, where even good balls are getting punished.

“Bowlers will have a difficult time on such wickets in Test cricket,” Taskin said. “There are few options to create chances. A good ball at times becomes easy to play. A boundary is coming with a slight erring of line or length. We declared on 541. Someone like Lakmal even bowled 36 overs. It would have been better had there been some help for bowlers.

“It is important to bowl consistently at a length in Test cricket. One has to bowl according to the field too, and then surprise them with a bouncer. We have created one or two chances, but it went into a gap. I think it is a very good batting track. We have to be consistent and patient as a bowling unit.”

Taskin added that he hasn’t bowled so many overs in an innings in more than a year, but it is the sort of experience he wants to have, for the future.

“I am giving it my best effort. Hopefully we will have a better day tomorrow. If the second Test is also played in this type of wicket, our bowlers have to be more economical. We have to focus on the batsmen’s weakness,” he said.

If Bangladesh can secure a draw in this game, Sri Lanka may rethink the type of pitch they want in the second Test, at the same venue. They don’t have the option to think about a spin-formula, so either a similar pitch or one that actually aids the pace bowlers are their options.

It should still encourage the Bangladesh team management to give this pace trio another try. Taskin, Jayed and Ebadat certainly should be given the confidence that what they learned from this pitch should work even better in more favourable conditions and surfaces. If batters like Soumya Sarkar and Liton Das can be given so many chances, these bowlers also deserve a longer rope.