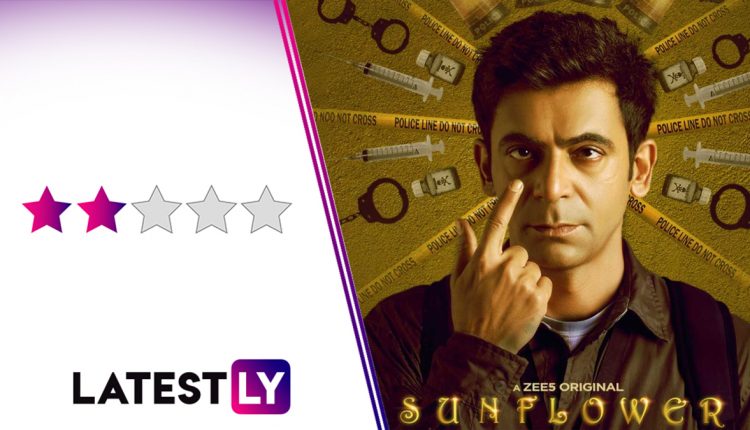 Sunflower Review: A crime-thriller with dark humour is a highly interesting prospect. It reminds me of Tehkikaat starring Vijay Anand and Saurabh Shukla, which used to air on Doordarshan. It may not have been an exact qualifier for the genre but it did the job well as some of the cases were quite deadly. But Sunflower despite having an almost novel genre to experiment doesn’t work on both accounts. It neither thrills nor makes anyone ROFL. Sunflower: Ranvir Shorey Says Sunil Grover Was One of the Reasons He Signed for the ZEE5 Show

Sunflower is a middle-class housing society where a member gets murdered. It’s not a murder mystery but a crime thriller, so the culprits are revealed in the first scene itself, or are they? Society sees a constant presence of cops post the murder which inconveniences many. While the investigation is on, the series also highlights the idiosyncrasies of its members like a guy obsessed with cleanliness and pervy inclinations Sonu (Sunil Grover), Dilip Iyer (Ashish Vidyarthi) who wants Indian culture in the society and opposes any tenant with a slightly different lifestyle than what he approves of, a modern girl Justina (Dayana Erappa) who parties and becomes an eyesore for the society and much more. In the midst of all this, Inspector Digendra (Ranvir Shorey) and his associate Tambe (Girish Kulkarni) are going through every possible evidence to nab the culprit.

Sunflower is lost for the better part of the series. The makers it seems are clueless about what exactly do they want to show. It oscillates between an investigative thriller and a social drama. Dark, white, or grey…humour is non-existent. My guess is the whole point of having Sunil Grover in the series is to have some jokes that can lighten up the mood but there are hardly any. While the pace is decent enough, nothing on it makes you invested in the story.

It drags and at times, you are frustrated that obvious clue-searching isn’t done here. FYI, this a generation that binged watched Sherlock Holmes on Netflix apart from other such series. Dilly-dallying on basic procedures doesn’t make it interesting at all! For example, why wasn’t the CCTV footage of the floor where the incident took place taken into consideration first? In which direction is the victim’s house located when his neighbour who lives right opposite the house, manages to get inside it through a balcony adjacent to his own? The cliff-hanger at the end is so predictable that I wonder was it done to justify a follow-up. Mukul Chadda Speaks on His Role in ZEE5’s Sunflower, on OTT Revolution and a Fave Series He Wants to Adapt (Scoop Buddy Exclusive)

Attention has been paid to the characters, I will give them that. All of them have some sort of story behind why they are behaving the way they are. That does make you a little interested but then they don’t have a graph.

Check out the trailer of Sunflower

Coming to the performances, Girish Kulkarni and Ranvir Shorey are simply fantastic. Both have contrasting character traits and that works perfectly well as they decipher the case. While Kulkarni is wily and cheeky, Shorey is much subdued and calm with his subtle wise-cracks. They are the backbone of this series. Sunil Grover does a decent job being an annoying meddlesome guy but his one-liners are hard to come by. Even when they do, they are rarely funny. I am not sure if it’s the problem with the jokes or the way they are delivered.

– clueless about the purpose of the show

Sunflower had the potential to embrace dark humour with an investigation in the backdrop but it fails terribly. Sunflower streams on ZEE5.

(The above story first appeared on Scoop Buddy on Jun 11, 2021 11:00 AM IST. For more news and updates on politics, world, sports, entertainment and lifestyle, log on to our website scoopbuddy.com).