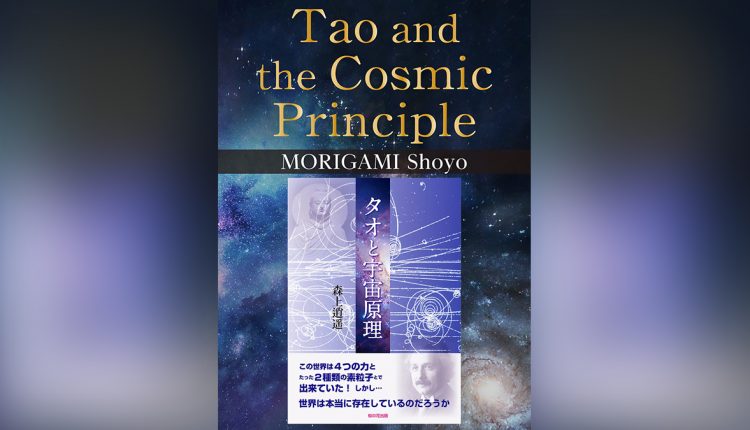 Tao and the Cosmic Principle

People of all times have always been curious about the origin of the universe and how it came to be. A question always remains at the back of our heads, ‘Who and what are we?’ or, more importantly, ‘Why are we?’. The field of eastern philosophy has its basics constructed on these very questions and on finding their answers. The laws of astrophysics have played a massive role in helping us discover and comprehend the formation of beings and their evolution. The book’ Tao and The Cosmic Principle’ focuses on extracting the reality that exists between all these questions and hopes to bring to light some probable answers.

The book introduces the laws of astrophysics in an attempt to reveal the truth of “existence.” The author’s specialties in Buddhism and Eastern philosophies, especially that of the philosopher Laozi have helped him extend his thoughts and beliefs about the topic. This book of inquiry, in its true essence, is a medium of communicating the initiation of the existence in the light of astrophysics and eastern philosophy.

The author of this book has mentioned how he has discussed the similarities between the psyche as the origin of man and the nucleus concerning the cosmos in the book’s context. He acknowledges the fact that the text may appear lengthy to some. Still, he believes that the intellectually curious will be excited to read about the cosmos, Buddha’s enlightenment, and the world beyond our own. A curious mind will always be sought after answers, no matter the medium. As long their questions are finding satiety, the methods remain irrelevant, they will continue to reach out to them.

Groundbreaking Five Features of this Book

For the first time in the world, the author pointed out that quantum mechanics is in agreement with human law. It presents the world’s first new concept of ” linguistic dimension “. Analyzing the correlation between what Buddhism calls “enlightenment” and physics.

Explaining the world of time theory, which is two-dimensionally branching and三世実有法体恒有(sanzejitsuhottaigōu、the existence of past, present, and future, and the constant dharma） that Buddhism preaches.

Antithesis to reductive materialists is one of the themes.

Throughout the book, all that we believe to be an answer to the universe somehow morphs itself into a question and then again into the solution. Are dreams  reality, or is the reality we live in  dream?—contradictory statements like these lace the concepts that the book tries to exhibit and explain. For the first time globally, the author pointed out that quantum mechanics agree with human law. For instance, quantum mechanics discuss ‘non-existence,’ and so does the philosophy of Buddhism. A tinge of intrigue is added by analyzing the correlation between what Buddhism calls “enlightenment” and physics’s say on the matter.

It also explains the world of time theory and how it is two-dimensionally branched from 三世実有法体恒有 (sanzejitsuhottaigōu、the existence of past, present, and future, and the constant dharma） that Buddhism preaches. All this becomes further proof of how sciences like astrophysics are, as a matter of fact, in relation to human laws and concepts.

Another theme that the book explores is the simplicity involved in the physical principle that this world comprises only four forces and only two types of elementary particles. Furthermore, it has become clear that these elementary particles are a mysterious existence that repeats birth and death（=生滅 syometsu, generation and destruction） and has wave properties when it is thought of as a particle.

This publication becomes a must-read as it successfully delivers the complex laws of astrophysics in an easy-to-understand manner. For example, it explains how the law mentioned above penetrates everything in the universe and is a part of the fundamentality we exist upon, which was revealed by the milestone discoveries in the field of quantum physics by Einstein, Bohr, Schrodinger, etc. And it also unravels the meaning of the law controlling every existence(both animate and inanimate beings) in the universe. It also describes how our human consciousness corresponds with this universal law of physics.

Evidently, this book is bold in its approach and logical in its reasoning. At many points in the text, we realize how a statement that initially was deemed as appalling by us now seems right due to an apt hypothesis. It proves to be a breakthrough attempt at recognizing and conveying the surprising correspondence of the structure of this universe revealed by the latest physics with the truth of “existence” that the wisdom of our predecessors, such as Buddhist philosophy and Laozi, preaches.

This book also talks about the magnificent universe and the future of humankind! Furthermore, as an epoch-making attempt, this book is trying to analyze an entirely new concept of the “linguistic dimension.” It is an intellectual analysis that reconsiders the evolutionary process of humankind from the perspective of “language” and emphasizes the importance of acquiring the ultimate “wisdom language”.

The book is a great read and will spike the interests of those keen on solving the mystery and the unknown possibilities of the universe.

Preface “This world” does not exist!

Chapter 1 Consciousness and Science  Ancient Wisdom and the Quantum Hypothesis

Chapter 4 The Mechanisms of the Cosmos and the Tao

Chapter 6 The Structure of Enlightenment

Morigami Shoyo was born in Fukuoka, Japan, and grew up to be a writer, philosopher, business owner.

Throughout his junior and senior years in Japan, he attended a Christian missionary school, Seinan Gakuin. Through Christian education, he became acquainted with the Bible and Western thought. This broadened the horizon of his thought process and helped him groom his intellect. Post high school graduation, he led a spiritual exploration life to expand his knowledge and view the world widely.

Soon after, Morigami attended Buddhism’s faculty, Rissho University as a scholarship student to study Indian Buddhism. During his undergraduate, he wrote a graduation thesis, “The study of transformed aggregates of Skandhas, or soul, in空観 (Kugan: the thought of emptiness). After graduating from university in 1979, he has held several positions, including a writer for an environmental issues-focused newspaper company till the present.

Earth Day 2021: Manushi Chhillar Features in a New Campaign PETA India, Encourages Everyone To Ditch Meat on the Occasion