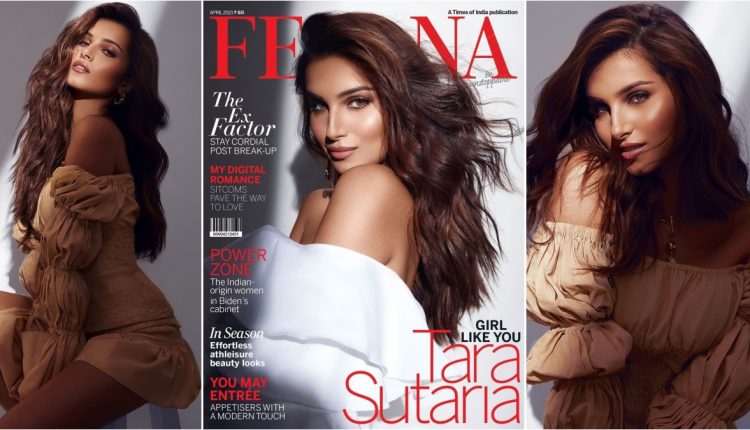 Oomphalicious! Bollywood actress Tara Sutaria leaves everyone speechless by dropping a photo from her latest cover shoot on Instagram. The 25-year-old Ek Villain 2 actress took to the photo-sharing platform to share a magazine cover featuring her as the cover girl. And Tara Sutaria does not disappoint.

She has appeared in a number of magazines ever since her glamorous Bollywood debut in 2019 with Student of the Year 2. And with each new appearance, Tara amps up her glam quotient. In the latest photoshoot, she turns up the heat. Tara Sutaria is All Things Sensuous In Her New Photoshoot for Exhibit Magazine (View Pics).

The Mumbai girl goes for a sultry look on the magazine cover. She is seen donning a white off-shoulder layered ruffle top from Madison. Tara goes for her signature wavy, shiny hair and bronze and glowy makeup look. She goes for well-defined eyes by using a lot of mascara. From the photos, we can see the petite actress wearing a pair of statement earrings with her outfit.

The second look from Tara Sutaria’s new photoshoot has the good-looking actress dressed up in more casual attire. She is wearing a beige smocked dress, which is again off-shoulder but with long sleeves and puff details. The hair and makeup (HMU) remain the same. However, a stack of neckpieces are more prominently visible in the second look.

In this issue, Tara Sutaria shares details about her personal life. How despite all eyes being on her, Tara’s priority remains choosing happiness and being surrounded by the people she loves. Tara is close to her parents, twin sister Pia and is in a steady relationship with actor Aadar Jain, who also happens to be Bollywood star Ranbir Kapoor’s cousin.

On the professional front, Tara has done two movies so far in her career, Student of the Year 2 and Marjaavaan. Both films fared averagely at the box office. However, Tara has interesting projects in her kitty with the likes of Tadap, Heropanti 2 and Ek Villain Returns.

(The above story first appeared on Scoop Buddy on Apr 29, 2021 05:16 PM IST. For more news and updates on politics, world, sports, entertainment and lifestyle, log on to our website scoopbuddy.com).