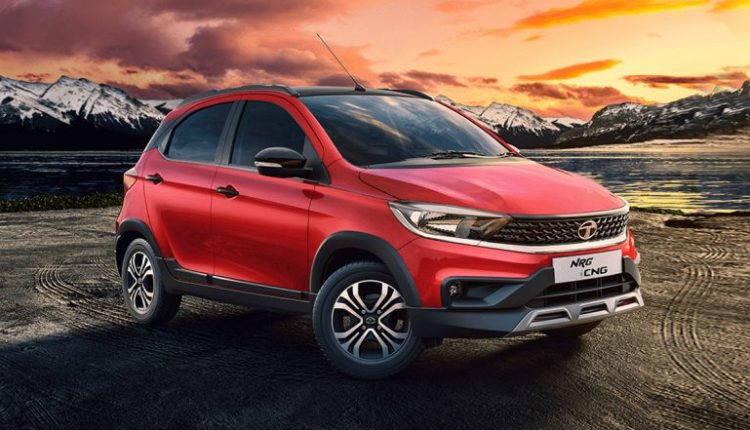 New Delhi, November 22 : Indian Auto major Tata Motors has launched the CNG avatar of its popular compact hatchback model – the Tata Tiago. The Tata Tiago NRG CNG model has launched in the home market with a starting price of Rs 7.40 lakh (ex-showroom, Delhi). The Tiago NRG CNG has expanded Tata’s CNG passenger car portfolio. The Standard Tiago and the Tigor are also available with CNG option. The CNG counterparts of the Tiago and Tigor are dearer by around Rs 90,000 compared to their petrol counterparts.

While the Tata Tiago NRG XT iCNG variant has been tagged at Rs 7.40 lakh, the Tiago NRG XZ iCNG variant has been priced at Rs 7.80 lakh (prices, ex-showroom Delhi). The CNG version of the Tiago NRG comes with a few mechanical tweaks. While the car’s suspension system has been tweaked, the vehicle has got lower ground clearance at 177mm compared to the 181mm of the petrol version. The CNG version also features only the 14-inch wheels for both the trim models, while the bigger 15-inch wheel is exclusive to the petrol top trim variant. The CNG version also misses out of fuel efficiency and distance to empty readouts that are present on the petrol version. Tata Motors Posts 30pc Growth in Revenue During Sept Qtr.

However, all the other equipment and feature lists have been retained in the CNG model, such as the Herman touchscreen infotainment system, Keyless entry, rear-view camera, digital instrument cluster, etc for the top trim.

Apart from those on the petrol versions, the iCNG versions of the Tata Tiago hatchback also comes endowed with some CNG specific features like – leak detection system, direct start and auto switchover between CNG and petrol. Tata Tiago EV Launched in India at Rs 8.49 Lakh.

Under the hood, the Tata Tiago NRG CNG comes with the same 1.2-litre naturally aspirated engine paired with a5-speed manual transmission only. The engine offers the unaltered figures of 84 bhp of max power and 113 Nm of peak torque in the petrol mode, while the output is lower on the CNG model – 72.4bhp and 95 Nm. The 60-litre CNG tank is fitted inside the boot of the car, which also reduces the cargo space.

(The above story first appeared on Scoop Buddy on Nov 22, 2022 05:55 PM IST. For more news and updates on politics, world, sports, entertainment and lifestyle, log on to our website scoopbuddy.com).