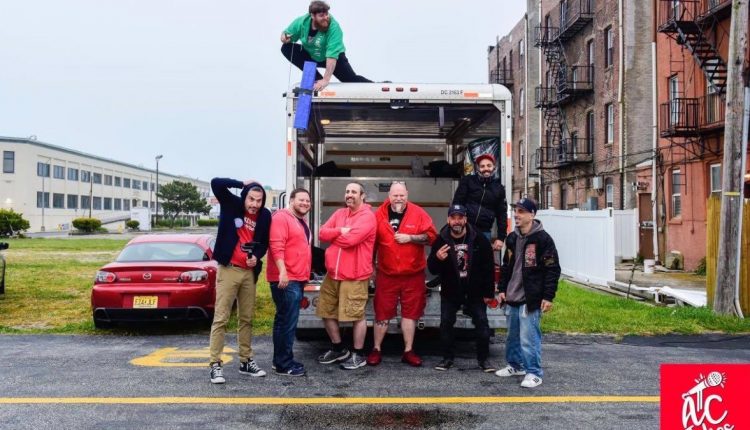 Team of Comics from Atlantic City Are Making Comedy Accessible During the Pandemic : Reports

As we now pass the one-year mark since COVID-19 completely restructured events and entertainment around the world, individuals at home are wondering if the ‘new normal’ will ever include concerts, shows, and engagements they once enjoyed before the pandemic. The new constraints and regulations that have been put in place to slow the spread have made intimate shows, like comedy shows, a pipedream for comics hoping to get nestled into a comfortable venue again.

Determined to innovate a new way to make comedy accessible to the masses once again, AC Jokes, a team of comics from Atlantic City, completely restructured the industry when they hosted the first drive-in comedy show of the pandemic. Guests were able to watch the show from their cars, with the audio streamed over their radios, while ordering food from Tennessee Avenue Beer Hall with direct delivery. All cars were placed six-feet apart, with up to 65 cars permitted to the show.

Needless to say, the performance was a hit, and the new form of comedy made national news. But, this wasn’t the first time AC Jokes challenged comedy norms and forced the industry to think and develop in new ways. As the only team of comics to form a stand-up comedy show that is run by the comedians themselves, AC Jokes has pioneered a grassroots approach to comedy, founded by the comics taking to the streets and the Atlantic City boardwalk to convince tourists to come to their shows. Eventually learning that this approach to ticket sales was ‘semi-illegal,’ something unique for Atlantic City, AC Jokes developed a brand based on hard work and humor.

This marketing approach paid off. Fans started to notice and attended their shows with renewed dedication! AC Jokes began running shows in several venues; One at the Tropicana Casino, one at Ballys and the other at Caesars Pier. One thing led to another, and AC Jokes became a comedy staple not only in Atlantic City, New Jersey but in the greater tri-state area. With this kind of momentum and support, AC Jokes broke another record: they began to run their shows seven days per week, making them the first comedy troupe to manage such a feat.

“As we like to say, we are a unique, dysfunctional comedy family,” said Matt Bridgestone. “Founded in 2013 when I noticed a Craigslist ad for a bar in Atlantic City, looking to amass events that would bring in a crowd, I had an idea. I began to assemble a crew of comedians headed to Atlantic City at a time when casinos were closing and Hurricane Sandy caused millions in damage. While the town was struggling, our family kept their spirits high. It’s that very community bond that makes our AC Jokes team so connected and formidable today.”

A Team of Champions

Bridgestone recognized that people were in a desperate need of a laugh. He began to work with comedians Zach Pickett, Mike Merk, Ray Vazquez, Gary G. Garcia, Buda The Comedian, Brian Steadman, and Petey Rancel. All of them had made a name for themselves in their own right, especially in the New York comedy scene, and were looking for a group that would change the trajectory of their careers. Coming together at a serendipitous moment, every founding member was able to recognize the dire need for comedy and enterprise in Atlantic City. It was this very spiritual feeling that solidified the formation of AC Jokes.

The town took notice, and locals, tourists, and even the AC Policy Department were delighted to see people visiting the city again for comedy and laughs. Being borne in such a dark time, the shows’ popularity grew quickly. However, it came with challenges, as group members ended up sharing hotel rooms, meals, and floors on their quest for success. The trials and tribulations were expansive, and group members bonded and fought over depressions, families, health issues, and everything that comes with sharing space. At the same time, the group faced criticism and doubts, as naysayers attempted to undermine the show’s innate talent.

But, refusing to take no for an answer, AC Jokes persevered, and their plan worked. By networking and investing in the community, they were able to make connections at the Blue Martini Show Room and book reoccurring shows at a time when critics stated they would never make it ‘big.’

The Arrival of COVID-19

With momentum behind the group, everyone panicked when COVID-19 arrived last year. The team was hosting 20 shows per week, and suddenly the world of entertainment was put on halt. Of course, that didn’t stop AC Jokes. They never stopped fighting, and sat down to brainstorm a way in which to make their comedy accessible in 2020 and now 2021. In true AC Jokes fashion, putting on the first drive-in comedy show was not easy: local law enforcement pushed it back. But, through that same stubborn spirit, Atlantic City finally caved in and hosted a world-changing event that has put AC Jokes back on the map yet again.

Where will AC Jokes go with this newfound comedy performance art that has been met with positive reception? The team is working fervently to bring smiles and laughter back into yet another moment of darkness and despair. Founding members know their art of comedy is so needed in a pandemic-ridden world, and they accept that role with pride and honor.

“Comedy has not only been our passion as a team, but it’s also been a cathartic release, and for some of us, the saving grace in our lives,” said Mike Merk. “Comedy can pull people out of depression, addiction, and self-destructive habits that are lethal. I can speak for myself and so many of our team members when we say that AC Jokes is so much more than a comedy show; it’s a lifestyle and movement, and we can’t wait to see what 2021 has in store for us.”

Matt Bridgestone, Mike Merk, Petey Rancel, Gary G. Garcia, Buda the Comedian, Brian Steadman and Zach Pickett are working to expand the group’s reach, making YouTube videos, podcast interviews and appearances, and plenty of content for social media. The group is even experimenting with new, up-and-coming social media apps, like Clubhouse for getting the word out there.