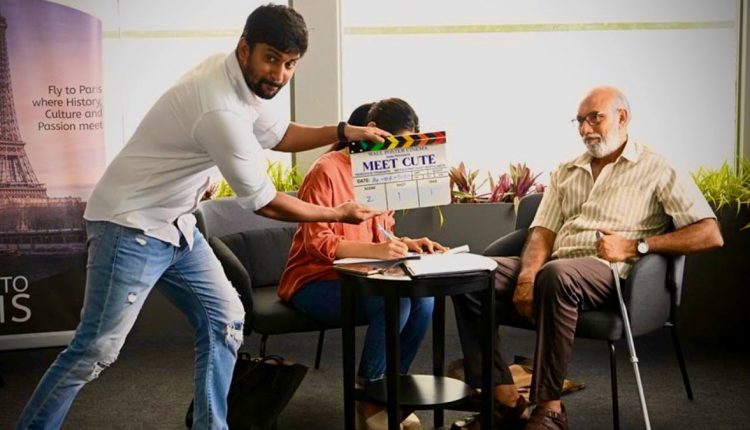 Telugu actor-producer Nani announced the commencement of his production venture Meet Cute, in an Instagram post on Monday. “Wall Poster Cinema Production No 4 #MeetCute. A new journey begins today. This one’s special for more than one reason,” wrote Nani as caption, with an image that shows him giving the clapperboard to actor Satyaraj. From Allu Arjun’s Pushpa, Chiranjeevi’s Acharya to Nani’s Tuck Jagadish; These Most-Awaited Telugu Films Suffer Due to COVID-19 Pandemic.

The film is being co-produced by Nani and Prashanti Tipirneni, and marks the feature film directorial debut of Nani’s siter Deepthi Ganta, who had earlier directed a short film titled “Anaganaga Oka Nanna”. Ante Sundaraniki: Nazriya Nazim Fahadh Shares Her Excitement As the Actress Kickstarts the Work on Her Telugu Debut Film Starring Nani (View Post).

Nani has earlier produced films such as “Hit” and “Awe”, and his new film is said to have a female-driven cast. The actor is awaiting the release of his film “Tuck Jagadish”, directed by Shiva Nirvana. The film also stars Ritu and Aishwarya Rajesh.

(The above story first appeared on Scoop Buddy on Jun 14, 2021 11:31 PM IST. For more news and updates on politics, world, sports, entertainment and lifestyle, log on to our website scoopbuddy.com).

Surrounding Yourself With Success: How Michael McDougall, With His Creative and Astute Skills, Reached the Top of the Entrepreneurial World