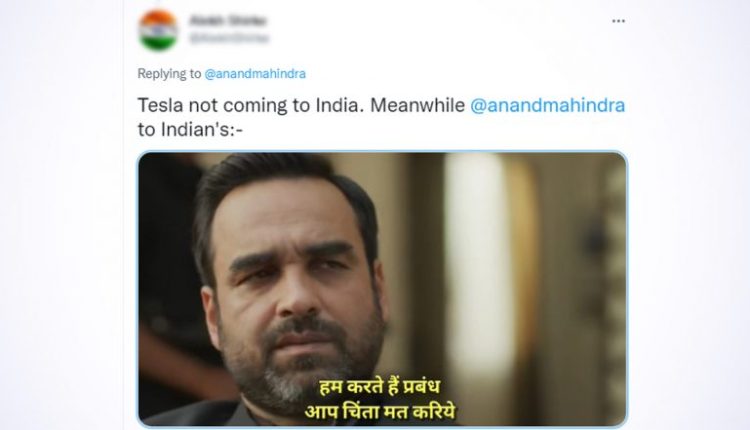 Tesla vs Mahindra Meme Fest: Anand Mahindra’s Reaction to User’s Post on Tesla Not Coming to India Is Epic!

Business tycoon Anand Mahindra on Tuesday shared a tweet after a user posted a meme about Elon Musk’s Tesla not coming to India. The post shows the famous dialogue from Mirzapur web series, “Hum Karte Hai Prabandh” said by Pankaj Tripathi’s character Akhandanand “Kaleen Bhaiya” Tripathi. Twitter has been abuzz with Tesla vs Mahindra memes after Mahindra & Mahindra unveiled five electric SUVs on Monday, August 15, India’s 76th Independence Day. Anand Mahindra had tweeted a video of the five electric SUVs. According to reports, the first four SUVs are expected to hit the road between 2024 and 2026. At present, Mahindra & Mahindra does not have a presence in the electric car while Tesla is the world’s leading electric automaker.