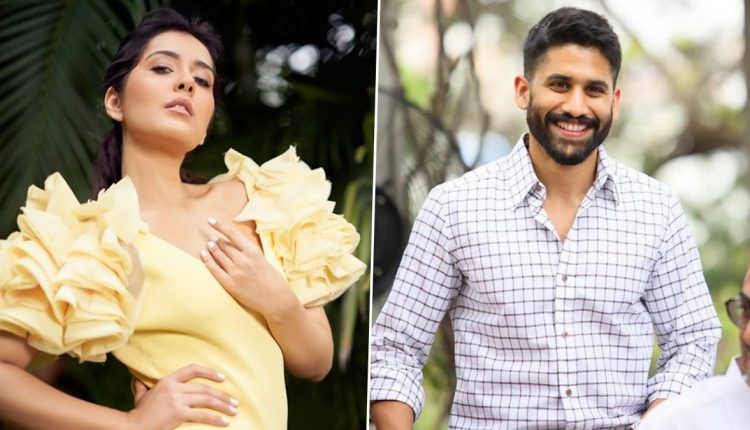 Actors Raashii Khanna and Naga Chaitanya Akkineni have started shooting for their upcoming Telugu film Thank You in Milan, Italy. The team will then be stationed in the city of Turin for 20 days for the shoot. This is Chaitanya’s second film with Raashii after “Manam” and “Venky Mama” in the past. “Thank You” is directed by Vikram Kumar, who had earlier called the shots on “Manam”, too. COVID-19: Naga Chaitanya And Sai Pallavi’s Love Story Gets Postponed, New Release Date To Be Announced Soon.

“Here in Turin and Milan the Covid-19 cases are no longer as many as they are elsewhere. We are a very small unit and we’re taking all the necessary precautions. Although I’m here, my heart is still in India,” said Raashii. Apart from “Thank You”, Raashii’s upcoming projects include” Tughlaq Durbar”, “Aranmanai 3”, “Methavi” and “Bhramam”. “Aranmanai 3” is part of a successful Tamil franchise and its first look was unveiled recently. Laal Singh Chaddha: Naga Chaitanya To Step Into Vijay Sethupathi’s Role In Aamir Khan’s Film – Report.

She also awaits the streaming of her digital debut series directed by Raj and DK, and starring Shahid Kapoor and Vijay Sethupathi. Naga Chaitanya’s film “Love Story” with Sai Pallavi is set for release. The film has been pushed back owing to the pandemic.

(The above story first appeared on Scoop Buddy on Apr 24, 2021 06:18 PM IST. For more news and updates on politics, world, sports, entertainment and lifestyle, log on to our website scoopbuddy.com).