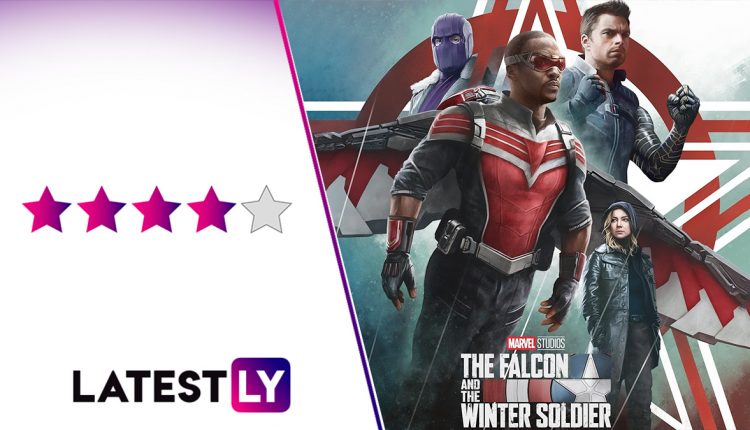 The Falcon and the Winter Soldier Finale Review: An Exhilarating Finish to Marvel’s Disney+ Series That Goes Way Deeper Than You Think! (LatestLY Exclusive)

The Falcon and the Winter Soldier Finale Review: Marvel’s careful construction of their Cinematic Universe needs to be a subject for business schools. Kevin Feige definitely needs to go out there and talk to students about how he made what was a failed film-division into the biggest money-spinning studio in the world. I thought they would hit the peak with Avengers: Endgame; what could possible beat a finale that pushes in nearly all Marvel movie superheroes you met to take on a purple alien! But with WandaVision and now The Falcon and The Winter Soldier, Marvel has not only ventured into new arenas but also began to delve into complex themes. The Falcon and the Winter Soldier Finale: Sam Wilson Donning Captain America’s Suit Makes MCU Fans Go Wild!

If WandaVision addressed the five stages of grief in its sitcom style-narrative, then The Falcon and the Winter Soldier tackled racial divide and migrant crisis in its straightforward narrative. Which show did it better at the end of its six-episode run is a matter of a different debate, but there is hardly any doubt that both the series have been successes in their own rights, and shows that the small medium allows Marvel to take risks with tackling subjects that its big-screen products might not want to touch.

Speaking more about the finale of TFATWS, well, what an ending! The sixth episode brought all the dots from the previous episodes, placed them in a thrilling series of escalating skirmishes, and connected them into some predictable and then unpredictable patterns. Of course, there will be some SPOILERS ahead, so do be careful.

We all knew that the series would be about Sam Wilson aka Falcon (Anthony Mackie) completely embracing the idea of being the next Captain America. The final episode played along with that, but there would be this child in you, who would have been thrilled when Sam made a smashing entry in his new Captain America suit, with Falconised weapons (also, hello! Red Wing 2.0!). The adult in you (the sensible one, that is) will be exalted when he reminds you of the significance of having a black man in that suit, usually adorned by someone with blond hair, fair skin and blue eyes.

There are quite a few scenes that sees Sam go on typical Captain America beats, like the fight with Batroc (Georges St-Pierre), or when he was asked to stand down, or his refusal to fight with Karli (Erin Kellyman), even when she had nearly tried to kill so many people in the episode. It still doesn’t feel that he is walking on the same path as Steve Rogers did, but instead using that path to carve his own. The speech he gives to the senators near the ending brings much more resonance to the listeners than Steve did. No offense to the original Cap, but Sam’s talking down in the climax would touch you because it addresses so many things that is hurting humanity globally IRL, but without losing the comic-book spirit. And to think, Sam also doesn’t have the serum flowing in him to given him that super-strength!

As for the other superhero who has that, Bucky aka The Winter Soldier (Stan Sebastian) takes more of a backseat, rightly so, though we get to see him also in the action. He is more on the rescue mode, though, trying to contain things rather than letting them blow out. His phone conversation with Karli had a nice touch, where he reminded her of how he tried to fight a cause that is bigger than him, twice, and failed both times. Also, it is always good to see the character let his hair down and smile.

And there are the important supporting characters. I was a little disappointed that neither James Rhodes (Don Cheadle) or Torres (Danny Ramirez) joined the heroes, even though they could have. Torres still has the old Falcon suit, that we might see later down the line. Even more disappointing was to see Julia Louis-Dreyfus’s Valentina also getting very little to do, though the Veep actress shows why her casting is such a big deal in the MCU even with her one-scene presence.

But the episode gets the other important characters to shine and that’s more important. Karli’s trajectory was always going to end against her, which was written on the wall long ago, but that doesn’t make the end of her arc, and her cause, any less poignant. Some eagle-eyed Marvel fans had already predicted Sharon Carter (Emily VanCamp)’s play, and that turned out to be true, though I am glad to see that Marvel is having big plans with her.

Then there is the disgraced alternative Cap, John Walker (Wyatt Russell), whose storyline surprised me the best. I was expecting him to be becoming the next Marvel villain, who could be the clone-of-the-hero cliche, however, what the makers did here was very unpredictable. And nice.

Why, even Baron Zemo (Daniel Bruhl) and Isaiah Bradley (Carl Lumbly) get satisfying conclusions to their plotlines, despite playing very less role in the main action.

Overall, the sixth episode of The Falcon and the Winter Soldier left me a lot whole satisfied than the conclusion to the WandaVision saga that left me with more questions instead. It’s not that the finale of TFATWS didn’t leave arcs for future projects, but it ties up all the needed storylines neatly, save for Agent Carter’s. WandaVision Episode 9 Review: A Befitting but Predictable Finale for Elizabeth Olsen’s Disney+ Series That Gets Bogged Down by Fan Theories.

The action sequences are nothing short of a spectacle and the cinematography and stunt work are fantastic. But of course, the big credit has to go to the director, Kari Skogland, who entered what has been a predominantly boys arena and gives a very enjoyable, and yet deeper superhero series, that would put her in the same bracket as Patty Jenkins (Wonder Woman). Now over to you, Chloe Zhao (Eternals)!

– A More Than Satisfying Conclusion to Most of the Storylines

– A Couple of Predictable Turns

The Falcon and The Winter Soldier, in its six-episode run, sees Marvel continuing its Phase 4 run with a more mature outlook and earning yet another success for the franchise. Good Performances, good writing and some deft handling of the action scenes make the finale on par with that of Captain America: The Winter Soldier, the movie that changed MCU from good to great. The series is streaming on Disney+ Hotstar.

(The above story first appeared on Scoop Buddy on Apr 23, 2021 04:18 PM IST. For more news and updates on politics, world, sports, entertainment and lifestyle, log on to our website scoopbuddy.com).

RR vs KKR Preview: Likely Playing XIs, Key Battles, Head to Head and Other Things You Need To Know About VIVO IPL 2021 Match 18