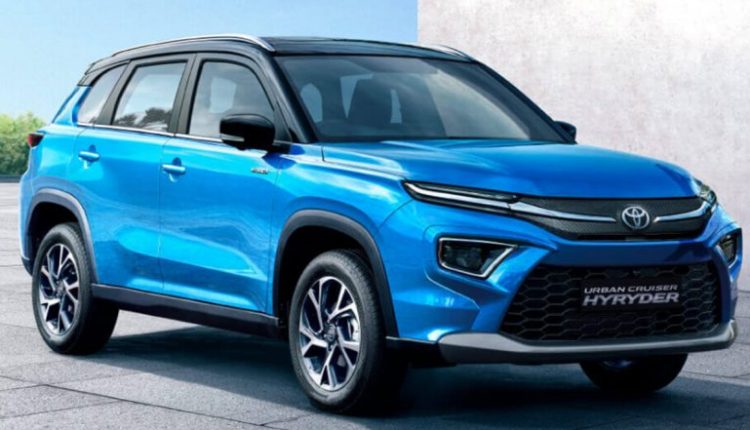 New Delhi: Toyota Kirloskar Motor (TKM) on Friday forayed into the highly competitive mid-size SUV segment with the unveiling of its latest model — Urban Cruiser Hyryder. The model, which is expected to debut in the upcoming festive season, will compete with the likes of Hyundai Creta and Kia Seltos, among others. The auto maker said it has commenced bookings of the model at its dealerships across the country for an amount of Rs 25,000. The Hyryder comes with two powertrains — Neo Drive and Self-charging Strong Hybrid Electric powertrain. Toyota Glanza, Urban Cruiser Sub-Compact SUV To Become Expensive From May 1, 2022.

The Neo Drive grade comes with a 1.5-litre petrol engine with Integrated Starter Generator (ISG) technology, delivering an output of 75kW. Neo Drive trims, which are equipped with an all-wheel drive (AWD), will also have an option of five-speed manual transmission and six-speed automatic transmission. Besides, the self-charging strong hybrid electric variants feature 1.5-litre petrol engine with THS (Toyota Hybrid System) and electric drive transmission, delivering engine output of 68kW and a motor output of 59 kW.

Finally, here’s an advanced SUV with the power of both #hybrid electric and petrol. So that every road you take leads you to #awesome destinations.

“We believe in collectively owning the responsibility towards creating a cleaner and greener future, with a vision to realise a ‘Carbon Neutral Society’. “In line with these goals, we are very happy to introduce the Urban Cruiser Hyryder, which will give a substantial boost to ‘Make in India’ and ‘Mass Electrification’ initiatives and thereby providing further impetus to ‘Atamanirbhar Bharat’,” TKM Vice Chairman Vikram Kirloskar said at the unveiling of the model here.

Speaking at the event, TKM Managing Director Masakazu Yoshimura said with over two million satisfied customers, the company’s focus in India continues to be the introduction of advanced products that are safer and cleaner and a good match for the energy mix of the country.

“Achieving carbon neutrality has always been the biggest challenge before us. Towards which, fighting against carbon will require multiple technology pathways and our latest offering is another step in that direction,” he noted. “For the first time as a part of Toyota’s global alliance with Suzuki, this model will be manufactured at TKM’s plant in Karnataka. We strongly believe this vehicle will provide a world-class motoring experience to all our customers,” he added.

The SUV comes with various features like panoramic sunroof, wireless charger, heads up display, 360-degree camera, six airbags, among others. The SUV also comes with over 55 connected features.