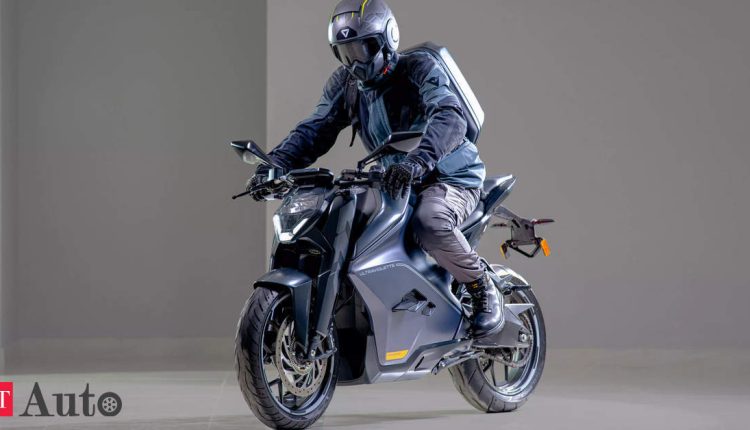 According to the company, the e-motorcycle is available in three forms of Airstrike, Shadow, and Laser. Each of the forms comes in two variants – the F77 and the F77 Recon with IDC Range of 206 km and 307 km respectively

The motorcycle is powered by a 10.3 kWh Lithium ion battery architecture on the top variant that produces 95 Nm of peak torque and 29 kW (38.9 HP) of peak power. It is offered in three ride modes of Glide, Combat, and Ballistic.

Though not the first Indian e-motorcycle maker, the TVS Motor backed start-up claims the F77 to be the first Indian electric motorcycle built and certified for global markets. Revolt Motors,Tork Motors, Srivaru Motors are the existing players in this segment.

Ultraviolette said it aims to establish itself as an international electric mobility brand from India and has an active roadmap to launch the F77 in selected markets in the next couple of years. As many as 70,000 pre-registration interests have already been received from over 190 countries, indicating the immense desire for the F77.

While international expansion is planned, the India rollout of the F77 will begin in January 2023 from Bangalore, followed by a phase wise expansion in Chennai, Mumbai, Pune and Cochin during Q2 2023, Hyderabad, Ahmedabad, Delhi and Lucknow IN Q3 and Gurgaon, Jaipur, Kolkata, Guwahati and Ludhiana in Q4.

The first Ultraviolette Experience Center will open in Bangalore. Production has commenced at Ultraviolette’s new state-of-the-art manufacturing facility near Bangalore.

The EV maker has also announced a limited edition series of the F77 with only 77 units being manufactured. This edition of vehicles will be available in meteor grey with afterburner yellow. It comes with 30.2 kW (40.5 HP) of peak power and 100 Nm of peak torque, delivering 0 to 100 km/h acceleration in 7.8 seconds with a top speed of 152 km/h.

Narayan Subramaniam, Co-founder and CEO, Ultraviolette, said, “The F77 is a result of Ultraviolette’s relentless pursuit for design and performance, and we can proudly claim that it is the most powerful electric two-wheeler in India with industry-first tech architecture and features.”

Niraj Rajmohan, Co-founder and CTO, Ultraviolette, said, “With its commercial launch, the F77 is undeniably the most technologically advanced electric motorcycle in India that is backed by over 5 years of R&D. Although built as an urban, high-performance sports motorcycle, we at Ultraviolette have spent the last couple of years putting the F77 through some of the roughest and extreme terrains and weather conditions across the country, proving its capability and safety features.”

The F77 is equipped with avionics-inspired vehicle electronics and battery technology. It comes with features like preventive maintenance, ride analytics, service, anti-theft and real-time data interpretation through the display and an app.

Customers can also access warranty offerings with the highest being 8 years/1,00,000 km, said the EV maker.

BYD, in a statement published on its official Weibo account, said the national subsidy for some electric and hydro power vehicles will end on Dec. 31, 2022. And the raw material price for batteries has also jumped since the second half of this year, it said. ($1 = 7.1465 Chinese yuan renminbi)