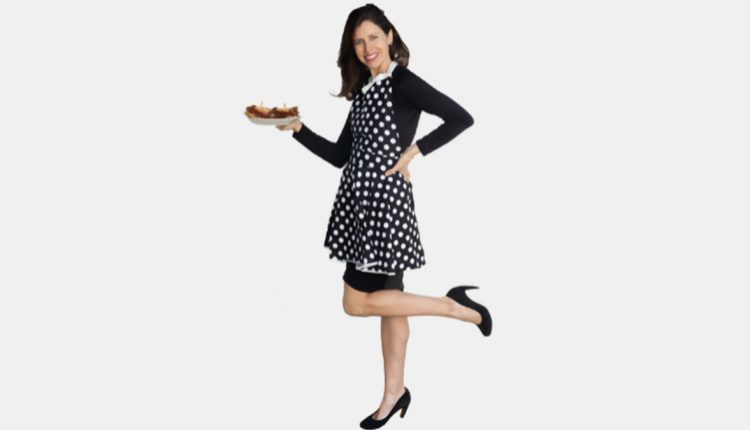 Voted by Thrillist as the #1 Plant-Based Meat From Fast Food Chains, over Beyond Meat and Impossible, Unreal Deli has gone from a small home kitchen, to Shark Tank, to thousands of restaurants and grocery store chains nationwide! Even PETA has taken notice, naming Unreal as one of their top plant-based deli slices. With distribution agreements already in place with Wegman’s, HEB, Whole Foods, Giant Food, Ralph’s stores and more, entrepreneur/mother of three, Jenny Goldfarb is the rising star in the explosive plant-based sector.

Slightly over a mere two years ago, pregnant in her tiny kitchen, this fierce mama started what is now becoming a major international food company.

Born in NYC, the great-granddaughter to New York delicatessen owners, Goldfarb’s city deli roots are what truly bring this product line to life. She created Unreal Corn’d Beef as a response to the NY-style deli she craved, but could no longer enjoy after becoming vegan.

With one little oven to cook her meats (and a bun in the oven!), Goldfarb shopped her sandwiches around to the big delis of LA and found places on their permanent menus. This got the attention of Whole Foods and landed her on Shark Tank with Mark Cuban offering more than double the cash she was asking for, almost unheard of on the show. “Unreal has a chance to be the leading provider of plant-based deli counter meats in the country,” Cuban told the Jewish Journal. “Every great company starts with a great entrepreneur, but needs great products to really grow into a powerhouse. Unreal has both.”

Off this success, she started to approach restaurants – Quiznos, Mendocino Farms, Veggie Grill – and was starting to make a killing in the restaurant world. That is, until COVID hit.

But this didn’t stop the moxie of Mrs. Goldfarb, who pivoted into retail and even brought on a second product to the line, Unreal Roasted Turk’y.

Cold calling and emailing complete strangers in the grocery retail space, her unwavering persistence and enthusiasm ultimately got the attention of many large supermarkets who agreed to take her products on.

Her initial retail success then garnered the attention of the largest national grocery marketing group, a $4B food brokerage team who saw this fierce mom punching way above her weight and wanted in. They watched one chain after the next jumping onto Mrs. Goldfarb’s bandwagon, and have joined the Unreal party, with expectations to deliver to every national and regional grocery chain across the country.

From that tiny kitchen, Goldfarb now oversees 2 manufacturing plants, while raising 3 children. As of early 2021 Unreal Deli products are found in thousands of stores across the country, including numerous sandwich chains, sub shops, and deli counters. Nearly every major supermarket chain in the US is stepping in line to carry Unreal Deli.

And as food service returns, Goldfarb is now working with some of the biggest food service groups to offer Unreal Deli at universities, hotels, and airlines.

Never doubt the power of persistent women, especially when they’re fighting to do good and serving up delicious, healthy, and eco-conscious food.

Unreal Deli continues to grow a cult-like following. Goldfarb has a growing audience of approving peers and adoring consumers. She is the real-life Mrs. Maisel!

Unreal Deli’s meats aren’t just delicious, they are good for you. Made from real vegetables and protein rich grains, an Unreal Deli sandwich packs over 20 grams of plant-based protein.

Increasingly people are trying to reduce their meat intake, while still wanting to enjoy the great taste and flavors of the authentic meats they know and love. In 2020 alone, plant-based food sales jumped by 27% and hit $7 billion! The global market for meat substitutes is forecast to hit $23.81 billion by 2023, a 28% rise over last year’s sales, according to the Wall St. Journal, Nov 18th, 2020. And a study by the Boston Consulting Group and Blue Horizon predicts that the alternative meat space will be a $290 billion industry by 2035!

Unreal Deli continuously sells out their 5-ounce retail packs of Unreal Corn’d Beef & Unreal Roasted Turk’y on all retail shelves and their restaurant partnerships consistently blow expectations out of the water.

What’s next for this local mother of three young children, aside from national & international distribution of her products? The company will soon launch its next deli meat: Roast Beef style Steak Slices, the meatiest flavor in its lineup and Cuban’s current favorite, showing the world that the best deli is now made of plants, and never to underestimate the power of a fierce woman!

Jr NTR Recovers From COVID-19, RRR Actor Says ‘Your Will Power Is Your Biggest Weapon in This Fight’ (Read Tweet)