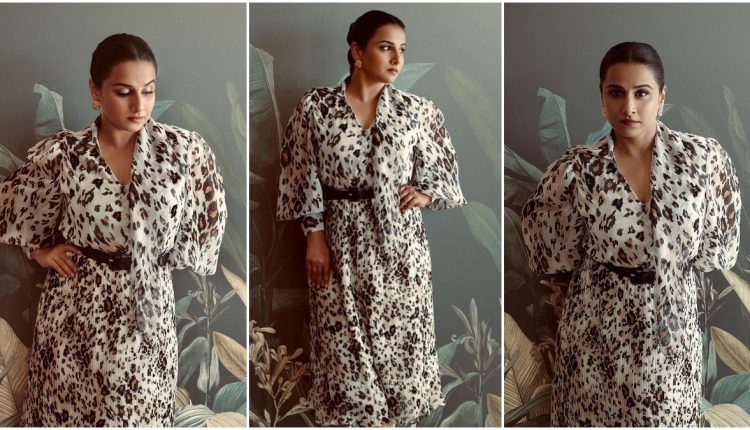 Vidya Balan is actively promoting her upcoming release, Sherni these days. The actress is leaving no opportunity to flaunt her love for #vocalforlocal by picking various Indian brands for her multiple appearances. After strutting in style in some classic sarees, Vidya recently picked a stunning co-ord set and took her promotional outings to a whole new level. She essays the role of a forest officer in her next and her leopard print dress was a reminder of that, well… sort of. Yo or Hell No? Vidya Balan’s Tie-n-Dye Dress For Sherni Promotions By Nupur Kanoi.

Vidya’s leopard print dress might have been an intentional or coincidental choice, we don’t know, but we are thoroughly impressed by it. The printed co-ord set belonged to the house of Mellowdrama and Vidya carried it gracefully. She paired her outfit with black strappy heels, gold studs and hair tied in a simple braid. Contoured cheeks, nude lips, curled eyelashes and dark brows completed her look further. Vidya Balan Continues her Support for #VocalforLocal, Flaunts a Colourful and Pretty Striped Dress by Label Anushree.

Vidya’s team of stylists took to their Instagram account to share pictures from her new fashion outing. Sherni is helmed by Amit Masurkar who has previously directed Rajkummar Rao’s Newton. The movie is scheduled to release on Amazon Prime Video on June 18. Recently when the makers of the movie were in conversation with a media portal, they had applauded Vidya’s thorough sincerity and professionalism while also saying that she was their only choice for the movie. Well, once it’s Vidya, it’s hard to think of anyone else.

(The above story first appeared on Scoop Buddy on Jun 10, 2021 08:58 PM IST. For more news and updates on politics, world, sports, entertainment and lifestyle, log on to our website scoopbuddy.com).

United States: Virginia Tech Footballer Allegedly Beats Up Man to Death Upon Discovering He Was Not Woman After Having ‘Oral Sex’