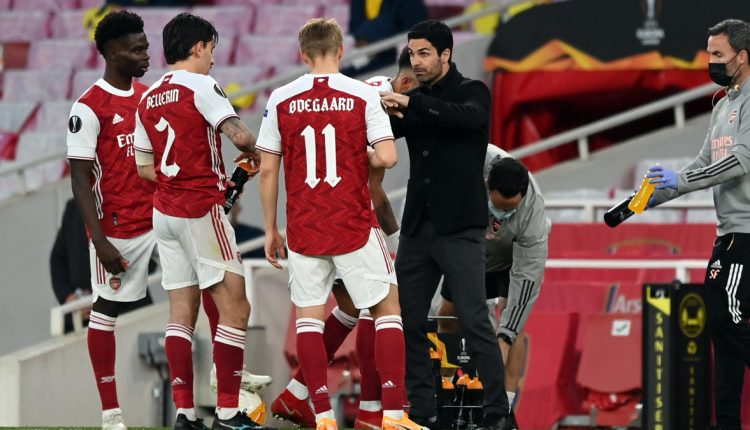 Arsenal’s hopes of playing European football next year and finishing their underwhelming season on a high seem to be fading fast after yet another European disappointment after being knocked out of the Europa League semi-finals by former manager Unai Emery’s Villarreal. Trailing 2-1 after the first leg, Mikel Arteta’s men were unable to complete the job on Thursday, producing yet another below-par performance, raising questions about the future of the manager and the club itself. Arsenal 0-0 Villarreal, UEL 2020-21: Unai Emery’s Side Knock Gunners Out After Goal-Less Draw.

There was optimism at Arsenal when Mikel Arteta was appointed as their new manager in December 2019, replacing Unai Emery at the helm. Upon his appointment, the former Gunner stated that the club had lost direction and he intended to bring them back to their glory days. Arteta’s first few months were quite promising, with him leading the Gunners to a FA Cup triumph, becoming the first Gunners manager to win a trophy in his first season.

The Spaniard’s first full season also started in optimistic fashion as Arsenal defeated Liverpool to win the Community Shield and at that point, Arteta looked to have inspired a team that had lost its belief and was looking like an inspired choice. But fast forward less than a year later, it is difficult to see any progress at the club as once again the Gunners are stuck in the same loop of uncertainty.

Villarreal progress, as we are eliminated at the semi-final stage.

This loss will be damaging for Arsenal and more so for Mikel Arteta as the manager he replaced, Unai Emery, has got one better over him, taking Villarreal to their first-ever European final after having previously won the competition three times with Sevilla and guided Arsenal to the showpiece in 2019.

Despite having been in charge of the club for more than a year and Arsenal bringing in many star players, Mikel Arteta still remains unclear of his first-choice starting XI as he continues to experiment with the formation and personnel, with many players looking lost and unsure of themselves on the field as a result.

Arsenal finished eight last season, their lowest since the 1995 season, and with four games remaining in the season, they are ninth in the table and given their current form it looks highly unlikely that the Gunners will be finishing any higher than that and barring any miracles, the club looks certain to miss on European qualification for the first time in a quarter of a century.

Why does Mikel Arteta deserve to continue as manager?

This season has been a total disaster, we’re playing dreadful football, and we just got kicked out of Europe by the guy he replaced. Humiliating. #afc

The domestic disappointment and the latest showing against Villarreal are set to have repercussions as there will be question marks over the future of many players, the manager and given the extent of the fan protest in recent weeks, on the club’s owners as well.

Mikel Arteta was appointed with a long term project and a massive rebuild in mind but with the club failing to make any notable progress under him, the club, who have backed him for so long, might be forced to make a decision at the end of the season as the optimism surrounding him seems to be fading.

(The above story first appeared on Scoop Buddy on May 07, 2021 09:56 AM IST. For more news and updates on politics, world, sports, entertainment and lifestyle, log on to our website scoopbuddy.com).