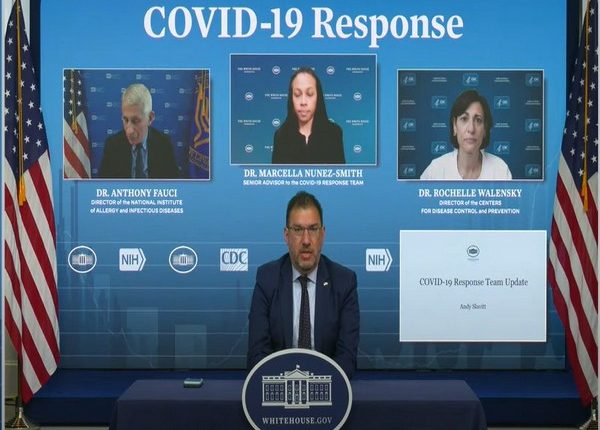 Washington DC, May 26: A senior White House coronavirus adviser has said the world needs to “get to the bottom” of the origins of the COVID-19 pandemic while adding that the WHO and China need to do more to reach the definitive answers in the matter.”It is our position that we need to get to the bottom of this and we need a completely transparent process from China. We need the WHO (World Health Organization) to assist in that matter. We don’t feel like that we have that now,” said WH Covid advisor Andy Slavitt on Tuesday during a briefing.

“We need to get to the bottom of this whatever the answer may be and that’s a critical priority for us,” he added.

Answering the same question during the briefing, Dr Anothy Fauci, the Biden administration’s top medical adviser said they “feel strongly” that the world should continue with the investigation and go to the next phase of the probe that the WHO has done. Coronavirus Origin: WHO-China Study Says Animals Likely Source of COVID-19, Lab Leak ‘Extremely Unlikely’.

“Because we don’t know 100 per cent what the origin is, it’s imperative that we look and do an investigation,” he added.

This statement comes a few days after an explosive Wall Street Journal report stated that three researchers from China’s Wuhan Institute of Virology sought hospital care after they fell ill in November 2019, a month before Beijing reported the first patient with COVID-like symptoms.

“The US government has reason to believe that several researchers inside the WIV became sick in autumn 2019, before the first identified case of the outbreak, with symptoms consistent with both COVID-19 and common seasonal illnesses,” the report read, fueling debate of the lab leak theory.

The revelations come amid growing calls for a fuller probe on whether the COVID-19 virus may have escaped from the Chinese laboratory. It also comes on the eve of a meeting of the WHO decision-making body, which is expected to discuss the next phase of investigation into the origin of COVID-19.

Earlier this year, the WHO report determined that the possibility the virus came from a lab was “extremely unlikely,” noting there was “no record” any lab had closely related viruses. The probe was criticized by various countries including the US, and UK over its limited access to “complete, original data and samples.”

The organization was also accused of being overly deferential to China throughout the course of the study, which was co-authored by 17 Chinese scientists — several of them from state-run institutions.

China refused to give raw data on early COVID-19 cases to the WHO-led team probing the origins of the pandemic. Beijing has been accused of delaying access to international investigators for months after the initial outbreak, virtually guaranteeing that the lab had been deep-cleaned before any forensic analysis could be done.