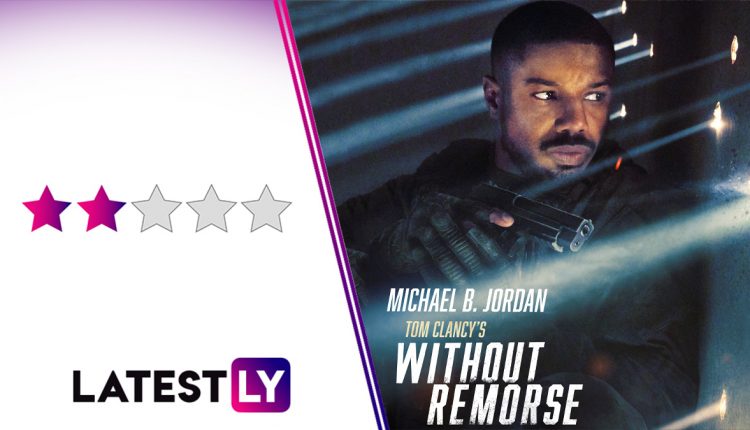 Without Remorse Movie Review: Stefano Sollima’s Without Remorse is based on a Tom Clancy novel by the same name that came out in 1993. In the film, Michael B Jordan (also its co-producer) plays John Clark, a US Navy Seal. After returning home to his pregnant wife from a rescue operation in Syria, Clark sees his happy life shattered when a bunch of assassins kill his wife and wounds him, though not before he kills three of them. A couple of other members of his outfit are also killed in separate incidents. Michael B Jordan: The Movies That I Do Make I Am Doing That for a Reason.

Once recovered from his injuries, Clark is determined to find the fourth man who barged into his room, with CIA Agent Robert Ritter (Jamie Bell) claiming they could be Russian agents trying to seek revenge for the Syrian operation. Clark is determined to join a secret mission team to extricate the escaped fugitive assassin from Russia, though his unit leader Karen Greer (Jodie Turner-Smith) is reluctant to have him on the team. In the Russian operation, Clark and his team realise that things are not what it seems and the real villain could be closer home.

Without Remorse is scripted by Taylor Sheridan and Will Staples. Sheridan’s name in the writing credits did cause some exciting flutter in me, for he was also responsible for writing the solid Sicario. He had also scripted and directed the underrated modern-day western thriller Wind River.

So imagine my disappointment when Without Remorse turned out to be so errr… bland. Sure, Michael B Jordan makes for an engaging protagonist, and he is one good reason to watch the film.  But Jordan is not supported by a compelling screenplay. Without Remorse, more or less, comes across as a very okayish vendetta thriller stuck in the mould of a usual Tom Clancy novel-based movie, with us having seen a number of Jack Ryan films and series thrown around. OTT Releases of The Week: Michael B Jordan’s Without Remorse and Arshad Warsi, Boman Irani’s LOL- Hasse Toh Phasse on Amazon Prime Video, Mammootty’s One on Netflix and More.

The twists and turns are more than predictable. It isn’t hard to guess that the one Government agent who always acts like a a-hole may not really be the bad guy, as the movie keeps red-herring-ing you. It is also not hard to guess that the real suspect could be another Government agent, who likes to come across as a soft guy, and is also played by a popular actor. With unpredictability not at all its forte, Without Remorse mere goes through the motions of Jordan’s jawline getting more and more clenched.

There are a couple of actions beats that do catch your attention. The brief prison fight sequence near the second act where Jordan goes shirtless (and reminded me that COVID-19 can’t be a reason to not exercise) hinted the movie could take a turn for the better. Clark trying to escape a crashed plane also is a nail-biting sequence. Alas, apart from these two interesting bits, the rest of the movie fails to be anything  gripping.

No, wait, I can’t really say that. There is a mid-credit stinger that promises a more ambitious sequel. Wish they could have gone for that instead of this bland setup. (PS: John Clark leads the spinoff novel series of Tom Clancy’s Jack Ryan books)

While Michael B Jordan makes for a solid action hero, Without Remorse doesn’t really give him the room to explore the territory and leave a more impactful impression. As a revenge thriller, the film doesn’t tread new grounds and comes across an average fare. Without Remorse is streaming on Amazon Prime Video.

(The above story first appeared on Scoop Buddy on Apr 28, 2021 09:45 PM IST. For more news and updates on politics, world, sports, entertainment and lifestyle, log on to our website scoopbuddy.com).

Poland-Bound Men, Women’s Relay Squads Grounded in Mumbai Due to Ban on Indians by Dutch Government