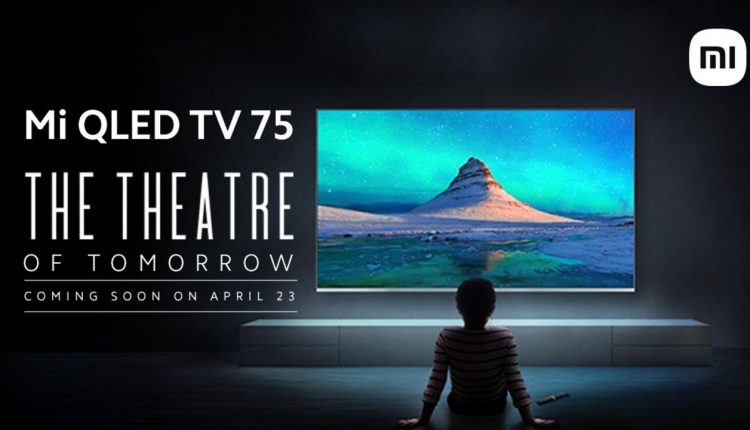 Xiaomi has taken to Twitter to announce the launch of the Mi QLED TV Q1 75-inch in India. There is no information on pricing, but it looks like it could be the same 75-inch QLED TV we saw launch back in February.

Internationally the Mi TV Q1 75-inch is priced at EUR 1,299 which translates to roughly Rs 1,17,000 approx. directly converted. It isn’t clear if the TV will be priced above Rs 1,00,000 in India considering the competitive nature of Xiaomi’s pricing of TVs. We will only know the price when Xiaomi unveils the TV on April 23.

Xiaomi isn’t new to the QLED TV game as it launched the 55-inch Q1 (review) back in December 2020. The highlight of the TV in addition to the QLED backlighting was the inclusion of all three HDMI 2.1 ports to give users access to ALLM (Auto Low Latency Mode). The TV also supports eARC for lossless audio. The 75-inch TV that launched internationally has only one HDMI 2.1 port so it will be interesting to see if the same happens here.

Another thing to note is the design of the TV. The international variant launched with a unique looking stand that supports the TV from the centre. This is a departure from that standard two feet design we have come to expect from Xiaomi TVs. The remote control that comes with the international variant of the 75-inch Mi QLED TV also looks different when compared to the minimalistic remote we have seen Xiaomi offer with TVs in India. Once again, it isn’t clear if Xiaomi will launch this new remote control in India.

As mentioned above, internationally the Mi TV Q1 75-inch is priced at EUR 1,299 which translates to roughly Rs 1,17,000 approx. directly converted. This makes the Mi QLED TV considerably more expensive than what customers expect. But then again, the most expensive component of a TV is the display. The larger the display, the more expensive it is to produce.

Just to put things into perspective, The 75-inch Kodak LED-backlit TV is priced at about Rs 1,00,000. 75-inch TVs from Sony, Samsung LG and more prominent brands will cost you upwards of Rs 2,00,000. Xiaomi has a history of launched devices at competitive prices and it will be interesting to see the price at which the Mi QLED TV 75-inch launches in India.